My dog can't stand and keeps falling over! What should I do? 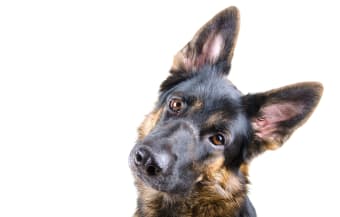 If your pooch is staggering, stumbling, or falling over, they could be experiencing a loss of balance due to a number of potentially serious conditions. In today's post, our Fremont veterinary team explains why you should seek medical attention for your pet right away if they are unbalanced.

Loss of Balance and Staggering in Dogs

If your dog suddenly loses their sense of balance or begins staggering, they could be suffering from a potentially serious underlying health condition. Loss of balance or staggering in dogs should never be ignored because these symptoms could be indicative of a need for emergency veterinary attention. If your dog has symptoms of any of the following health issues it's time to head to the vet right away.

Although strokes in dogs are relatively uncommon, they can occur as a result of kidney disease, blood clots, high blood pressure, hemorrhage, parasitic worms, or head trauma. Indications that your dog may be having a stroke include loss of balance, collapse, head tilt, loss of vision, and circling.

Brain tumors can be more prone in older dogs,although they can appear in dogs of all breeds and ages. Brain tumors may lead to a general loss of balance, stumbling, and staggering. Other brain tumor symptoms will depend upon the location of the tumor and may include changes in behavior and/or appetite, seizures, signs of pain, head tilt, swaying, a wide stance, lack of coordination, pacing, flicking of the eye and head tremors.

Encephalitis, commonly known as inflammation of the brain, can cause dogs to lose their balance, stagger, stumble, or fall over. Brain inflammation can result from a number of underlying issues including fungal infections, tick-borne diseases, and parasites. A dog with encephalitis may also exhibit other symptoms like fever or depression.

Ataxia is a condition in dogs that relates to a sensory dysfunction that results in a loss of coordination in the rear end, head, or limbs. There are three kinds of ataxia commonly seen in dogs: sensory, vestibular, and cerebellar.

Signs of ataxia include staggering, stumbling, and falling over. Your dog may also exhibit behaviors and symptoms such as flicking the eyes from side to side, tilting the head, walking in circles, vomiting, and nausea.

Loss of balance in dogs often occurs due to inner ear infections. If your dog is suffering from an ear infection, you could also see other symptoms such as odor in or around the affected ear, head shaking and scratching, walking in circles, and eye flickering, as well as redness, swelling, or discharge.

An injury like head trauma or inner ear damage can also cause balance issues in dogs. Some signs that your dog is experiencing pain due to injury include heavier-than-usual panting, a slowing of reflexes, enlarged pupils, biting or licking the wounded area, reluctance to lie down, and anxious behaviors.

If your dog is in need of veterinary care in the Fremont area, contact our team at Ace Animal Hospital for internal medicine diagnoses and treatment.

Ace Animal Hospital is accepting new patients! Our experienced vets are passionate about the health of Fremont companion animals. Get in touch today to book your pet's first appointment.